I feel the automation (Campaign) part of the Mautic is much of it’s power.

Still I feel there’s a huge space for improvement to make it a super-powerful general-purpose state machine.

I feel we should move towards the Workflow Theory of Tobias Nyholm which is explained here DPC2018: Knowing your state machines - Tobias Nyholm - YouTube and who is one of the main contributors to the Workflow component in symonfy as you can see here Commits · symfony/workflow · GitHub

Please visit the video and fast forward to minute 5’15" and watch until 7’38" (a couple of minutes).

With this “dual representation” with squares and circles I feel much more clear how to represent Mautic workflows: Squares are the current “actions” in the campaign diagrams.

Circles, instead, would be like “waiting-rooms” where leads “are” until a condition is met to go “outside” that condition.

This may be either the current “programming” for an action (the current “Execute this event…” part) or it could also be a “decission” (where the user is waiting until some action is taken by the user or times out).

Waiting rooms could have one or more “exit doors”: In an “action delay” there’s only one exit door that leads to the action itself, and in the “decission” for example it could be “multiple exit doors”: If the user clicks X then exit by door A. If not, he is still “inside” the waiting room. Then if a timer says “this lead has been here for more than X days” it raises the condition to exit by door B.

This new model would just make everything to lay into 2 categories:

A marketer could choose to set a “final waiting room with no doors” that “collect all leads that exit via certain branch” and the leads get “captured there” so when we do nurturing funnels, it will be super-easy to continue them on just by “placing new emails” after the last waiting room and then “open the doors”, avoiding the cumbersome solutions that Joey kindly shared with us as “workarounds” because mautic do not support “continuing on” an ended campaign (see here: Progressive funnel, what happens at the end? - #2 by robm and here https://joeykeller.com/2-powerful-nurture-campaign-tricks-for-mautic-3-and-4-incl-video/ )

Some side-benefits of this approach are: 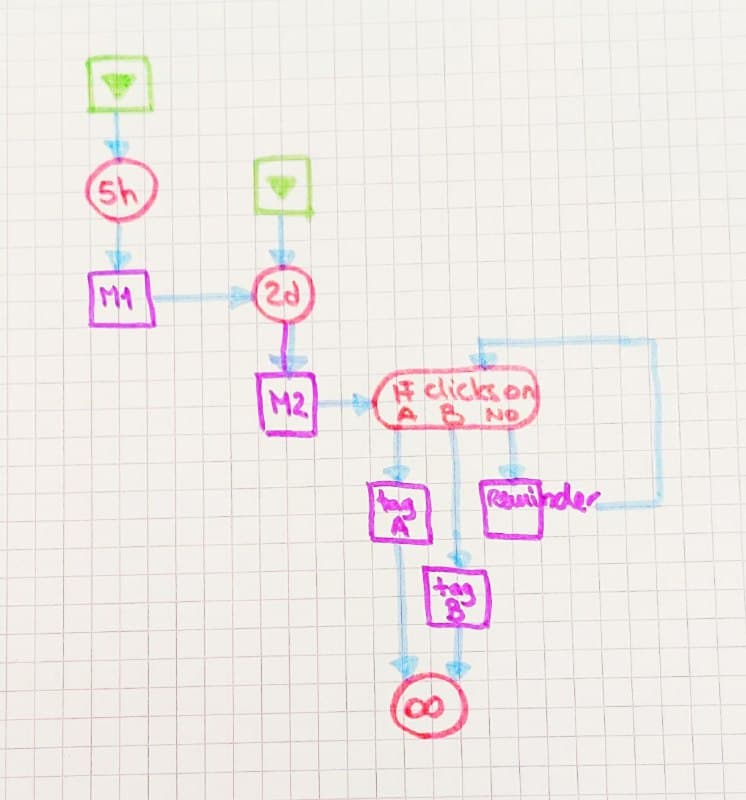 We could easily see “who” is INSIDE any of the four red circles, and take decissions in function of that.

I’ve a lot more development on this idea, but I feel it enough for throwing the idea into the forum.

Any core-developers intereseted in discussing it further?

Hi @xmontero, without having thought this through in full, I already love the approach - it’s really aiming for the next level!
To be more specific: It sounds like a perfect part of our “NextGen” Mautic - however my gut feeling is that it might easily fall through the cracks unless a team of people with some passion and domain knowledge who champion and drive this topic. Which in the Mautic community, we call a Tiger Team

It’s high time to get the Tiger Team “Campaigns” startet! (Obviously, with a larger focus, and ongoing.)
→ Wouldn’t you consider driving that launch, with enough help from the Community team?

The other option would be to turn this approach into an Intiative, more single-focussed, and to be ended once the goal has been reached.
→ You have the choice

Anyway, I’d love to bring this up in the next Mautic podcast (Mauticast.com) to make wore people aware, so do let me know!