Why doesn't mautic support captcha/reCaptcha for forms by default?

I’m looking to implement a captcha for forms but the only thing I can use is a non functional plugin made by a volunteer dev who no longer have time to answer questions. Why wouldn’t there be built in support for captchas? Seems like a necessary for forms nowadays? 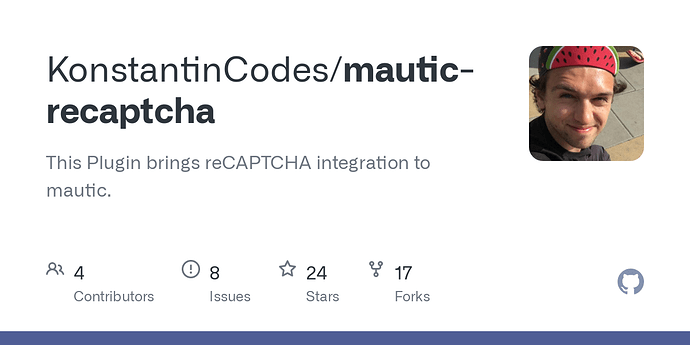 I have indeed. I doesn’t work.
To be more precise, It did work at some point but stopped having it’s captcha show up without me noticing for weeks.

Also didn’t really explain why isn’t captcha based bot deterrent not important enough to implement it into the whole system? Honeypots are only half efficient.

Weird. Does work for me. Did u install the right version?

Only inacuracy that I might predict is that the installation instruction says to delete the app/cache/prod directory.. However there is no such directory. I found it in /var/cache/prod but I don’t know if that is the same.

The thing is that there are no errors, no console reports, no issues. It… just doesn’t show up…

Is there a plugin for Google reCaptcha v3? This is v2, where the visitor has to check that annoying box. With v3 there is no interaction needed from the visitor.

Only inacuracy that I might predict is that the installation instruction says to delete the app/cache/prod directory. . However there is no such directory. I found it in /var/cache/prod but I don’t know if that is the same.

I think in Mautic 2 that folder was “app/cache/prod”, now in Mautic 3 it’s “var/cache/prod”. So the readme-file for that plugin wasn’t updated, that’s it.

file location changed in the transition from 2.x to 3.x
Thats the cache directory

In my case I’m perfectly content with captcha v2 with human checkbox, as long as it at least works.
What possible reasons could it have to not work? I have latest mautic update.

I GOT IT FIXED!

Apparently after some Mautic update, the forms code changed. I had to go copy the form code snippet and paste it into the page again.

Also, I don’t know if this is the same but there is an invisible V2 captcha.

I also installed the Recaptcha plugin and followed all instructions and renamed the directory afterwards, no cache/prod directory , one cache under var/cache but empty no prod directory. I’m running Mautic 3.2.5 and installed the : mautic 3 & 4: [mautic-recaptcha.zip]. When I go in the Mautic dashboard I don’t see the Recaptcha directory even by clicking: Install/upgrade it says 0 plugin installed or updated? Any ideas? Thanks